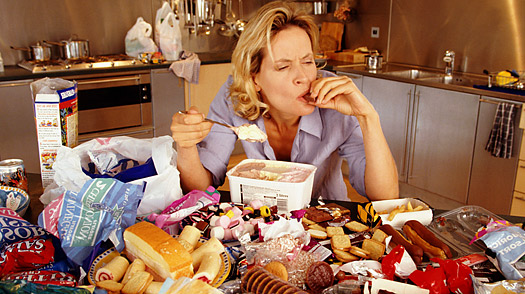 Most of us overeat at some point or the other, but if you overeat whether you are hungry or not, then this is a disorder called binge eating. You could have eaten an hour ago and still want to consume unusual amounts of food. In fact, you may not have any control over your stomach or appetite because of various reasons.

Both men and women can have this disorder, even those with normal weight. The disorder may eventually lead to weight gain or even obesity, which can ultimately support more compulsive eating.  If you have this disorder, you may be struggling with emotional problems such as guilt or loathing. In some cases, it could be depression or anxiety. In order to cope, someone with this disorder will usually express negative feelings, after which binge eating progresses to more food. This creates a vicious cycle that is hard to break.

The precise reason for this disorder is not known because there is a wide range of factors that can influence its development. Some of these factors include biological abnormalities, psychological issues or social problems. Some people suffer from irregularities with their hormones and this might be associated with addiction to food or compulsive behavior such as overeating. Depression, anxiety and binge eating are all correlated. When someone has low self-esteem and finds it hard to cope with their feelings, it is possible to choose binge eating to cover up the pain. People who have undergone abuse or other traumatic situations in their lives could revert to emotional eating. Those who are subjected to hearing criticisms about their weight might be vulnerable to compulsive eating. Some eating disorders are due to genetics. It is in the family and you tend to catch on to it, despite knowing that it is not good for you. You may have watched the people in your household overeating and done the same thing yourself. There are times when someone might struggle with weight and tried every weight loss diet in the book and nothing works. The disappointment might also lead to bingeing.

Persons suffering from this disorder will oftentimes be so embarrassed or ashamed about how they eat – that they will hide. Therefore, if you are looking for symptoms, you might not readily find them. Some people do exhibit certain emotional and physical behavioral signs that can be detected. These include:

If you are prone to bingeing, it is best to keep a food journal to keep track of what you eat throughout the day. You could also eat smaller meals. You should consider what makes you binge. Detecting the real issue can help you to deal with it so you can stop bingeing. If you are suffering with this disorder or know someone who is, let us hear what you think by leaving your comments below.

Success! Check your email for your confirmation and free download.

We will NEVER send spam or share your email with ANYONE, PERIOD.