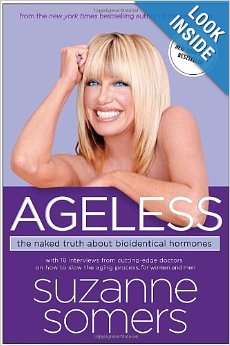 Deficiencies in a female hormone are identified with the use of a saliva test. Once the deficiency is found, the doctor will attempt to balance or correct the woman’s hormones. Suzanne Somers has endorsed a bioidentical hormone product that is claimed to be better than the synthetic option. Let’s do a comparison between the two.

Well, bioidentical hormones are said to be plant-based. These are compounded and packaged as a supplement. The uniqueness of this hormone is what sets it apart from the synthetic hormone. It is said to have the identical molecular construction as the hormones created in the human body. In fact, it is used to replace imbalanced hormones in the body. Synthetic hormones come in the form of pharmaceutical drugs, but many of them have side effects. The woman needs to bear in mind that the body is not genetically capable of engaging in certain hormone replacement methods using pills.

There is a lot of controversy about this concept as many try to dispute the claims made by Suzanne Somers. Somers encourages women to include estrogen and progesterone supplements as a way to combat menopausal symptoms. According to Somers, the molecular structure of traditional hormones can be very destructive to the health, whereas bioidentical hormones carry no health risks.

Somers has a team of expert professionals in the medical field to back up the claims that she makes. In fact, she has also gone on the Oprah Winfrey Show to speak about the anti-aging advantages of bioidentical hormones with confirmation from Oprah Winfrey, who takes the supplements as well.

Experts have done more than forty studies to show that bioidentical hormones can be safely used by any woman. For more than 50 years, women from Europe have been taking these supplements. This says a lot about their proven safety. The supplement has received approval from the FDA.

The conventional HRT synthetic drug is manufactured and pushed by the big pharmaceutical companies. Even though, approved by the FDA, it doesn’t mean that synthetic drugs are good for you.  For example, Premarin, a traditional synthetic hormone drug consists of estrogen made from the urine of a horse and medroxyprogesterone, which is said to increase the risk of stroke, heart disease and breast cancer.

As I tried to find out more about Somer’s bioidentical hormone supplements and the synthetic hormone drugs, I conducted many hours of research. I found out that bioidentical hormones have the ability to follow the same hormonal pattern as healthy women possess. The menopausal symptoms are reduced and there are no side effects, if the dosage is taken properly.

Every female has to make up her own mind as to the benefits that hormone replacement has on her body. It depends on her age, menopausal symptoms and the relief she is searching for. However, she should seek something that is safe for health. A woman on bioidentical hormone therapy will get her life back; feel young again and look as good as Somers looks at the age of 62.